The Winter Park Autumn Art Festival is the only juried fine art festival to feature Florida artists exclusively. More than 200,000 attendees are expected each year.

By invitation Only, Asia’s leading galleries will be presenting contemporary and classic art: 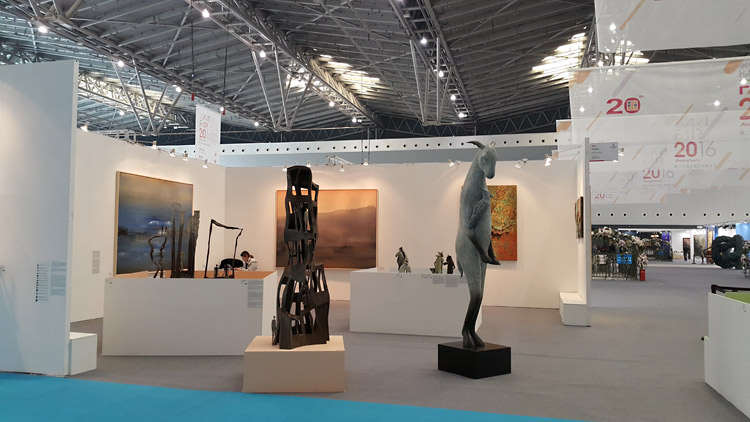 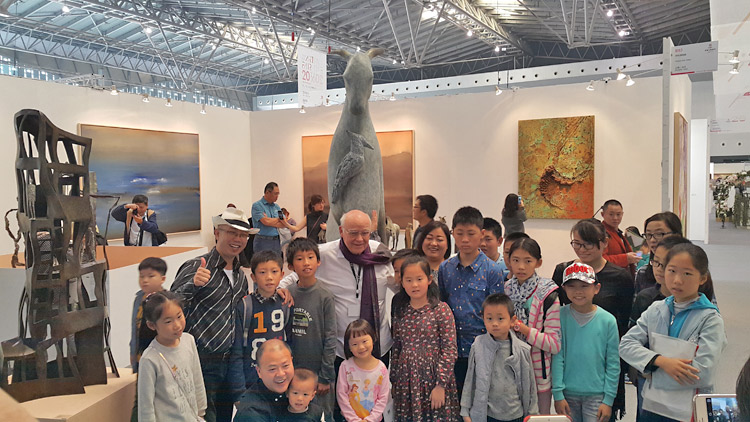 Copper Tritscheller isn’t necessarily drawn to the same animals that many sculptors like to portray. And Tritscheller’s creatures whether bats or donkeys, don’t always look like themselves because they bear humanlike features and talents. In fact, the sculptor’s signature bronzes push the boundaries between animal and human: burros balance precariously on pedestals and bats with exaggerated wings suggest comic-book superheros. The sculptor relishes working out the structural and aesthetic challenges of amalgamation and morphing the animal and human together in one figure.

Although Tritscheller creates a variety of animals, she is often attracted to bats and burros because she feels they are misunderstood. Throughout civilization burros have proven to be smart, loyal and hardworking, carrying loads that weight more than they do, she explains. And bats perform crucial ecological roles, consuming crop-destructive insects, and they contribute to fruit and flower pollination. “Like most artists, I want to create something that resonates with viewers,” Tritscheller says. “I don’t have premeditated ideas I want to convey but I do want to spark something akin to primal emotion – a feeling or thought that connects you at that moment with what you are looking at. I take animals which have caused an emotional response in me and try to share that feeling with my work.” –-Bonnie Gangelhoff

American artist Copper Tritscheller considers bats to be misunderstood and has created a series of sculptures based on the nocturnal mammal. This exhibition titled “Proud Copper” gives people an opportunity for people to look beyond the blood-sucking stereotype commonly associated with the animal. Bats help the agricultural industry by eating insects, yet they are underrated by people and are rapidly losing their natural habitats.

Tritscheller, who grew up in Georgia, United States, is a sculptor who portrays animals to tell truths about human society.

“Copper Tritscheller is part ballerina, part boxer and one only has to look at her work to recognize this balance of sensitivity and sinew as autobiography. A self-taught sculptor from the American South, Tritscheller has learned the alchemy of heat, metal and chemicals in giant Thai bronze foundries that are not for the fainthearted. What has emerged is psychology and emotion embedded within the craggy folds of her “man-bats.”

With an intimacy that suggests portraiture, her large red patinated bronzes are layered like raw and powerful Roman Centurions. One of those bronzes, a weighty five-foot piece entitled, “Reclining Bat,” has a beautifully realized, classic bat head on a human body that manages to transcend a predictable anthropomorphic translation.

Tritscheller has brought a wise dignity to her often maligned subjects – bats and burros – perhaps asking us to accord them the respect they deserve in real life. Indeed, in real life many bat species are endangered but perhaps the real resonance of this work is positing the question, is kindness itself endangered? “Reclining Bat,” an extraordinary balance of sensitivity and sinew, appears to represent all animals and all people. It says we are all connected, all needing the same things…love and respect.

Copper Tritscheller states that her influences include Javier Marin, Mario Marini and Leonard Baskin. She chose wisely for all share a vitality, mystery and dignity in their work.”

“Copper Tritscheller’s highly developed sense of three dimension, composition and scale translates to any subject matter. Attributes such as these cannot be taught, they are innate and a necessary part of any truly successful work of art.”

“Many artists sculpt horses. Others do elephants or birds. Copper Tritscheller sculpts burros and bats, the animals nobody pays any attention to, or worse, avoids or fears. Her “unsung heroes” as she puts it. That she loves these down-and-out animals is obvious from her beautiful renderings. What is amazing is that she makes us love them too.

Copper grew up in Georgia in the 1960s, where people who looked different were thought to be different. Not just different, but threatening. People were trapped in their superficial views of one another, views they couldn’t somehow get beyond. Perhaps this is where her sympathy for the underdog began, her sensitivity to how it must feel to be thought of as less, or dangerous. For it comes out loud and clear in her work now. The “lowly” animals she has chosen to portray are powerful, majestic, even regal. And yet, at the same time they are tender, sensitive, sweet. Observing her work, the viewer, perhaps for the first time, gets to really see a burro or a bat up close. Gets to see far beyond stereotype, and thus to question their former attitudes toward these animals. It would be the rare person who doesn’t come away with new feelings of affection and respect.

Copper is strongly influenced by Javier Marin, Mario Marini & Leonard Baskin, whose work, to her, is more about feelings than the physical reality of the subject. Similarly, in her own sculpture, bats and burros communicate. They tell a story. They share their wisdom. They are at once whimsical and sad. She has captured them at a moment in time when they seem to recount for us their long developmental histories, their plights, their endurance and survival. Also, their inner peace and integrity. Viewers are enriched by this encounter, this intimate interlude. Their awareness is expanded, understanding and compassion deepened.

The beauty of these creatures is not just external. It radiates from within, an awareness that we all—animal or human, black or white, male or female—want the same thing. To be noticed, seen, appreciated for who we are. An awareness, Copper seems to hope, that might be useful in the viewers’ larger world, in their interactions with family, friends, the larger society. But also, hopefully, with animals. She shows us the potential for greater intimacy there. Her animals feel, just as we do.

Her sculpted figures also relate to one another in the most improbable of pairings. A bat riding a burro? Or birthing out of its back? Very unlikely, and yet somehow convincing. We view impossible interactions that somehow make a kind of sense—how things might work, or should work, or do work in another reality. This is Copper’s genius. She dwells inside these animals psyches. And she shows us what she sees, beautifully. She shows us another way of being, of interacting. And this too might be useful to us in our daily lives, in our relationships with others.

They say that beauty is in the eye of the beholder, which is likely true. But here, in her work, it is not merely beauty to be observed, though there is all you might want of that. There is a strange sort of truth. There is the other side, the side we don’t normally see, the side that pushes our limits and stretches our imagination. All that good art should do. And Ms. Tritscheller does it, in spades!

When asked why she sculpts, she responds, Why do I breath? It is that natural for her, that elemental and necessary. Which is a good thing for us, because to view Copper Tritscheller’s work is to be enlightened.”

CURRENT EXHIBITION: I’m pleased to announce that my bronze “Stilted Flight” has been accepted into the juried “Flight” exhibition at the Manifest Gallery, a show that is an exploration into the concepts of “flight” and “velocity.” Opening is January 22, 2016: Manifest Gallery, 2727 Woodburn Ave, Cincinnati, Ohio 45206.

“Bats are wonderfully beneficial creatures that provide invaluable services to both natural ecosystems and human economies around the world. Yet they are also among the most misunderstood of animals – routinely feared and loathed as sinister denizens of the night. Except in China, where bats have long been celebrated as symbols of good luck and happiness. Their images embellished the palaces, thrones and robes of emperors.”